Merry Christmas from the Golden Family 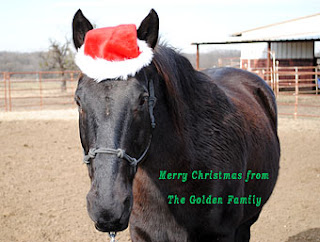 Wishing you all of the wonderful blessings of Christmas as we celebrate our dear Savior's birth - Merry Christmas!
Posted by Nancy at 7:19 AM No comments: 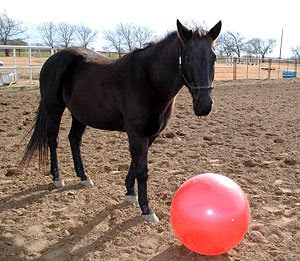 Dylan and I played with the 30 inch ball that we are thinking about offering as part of our fun kit. We try each item before we add it to our kits and I thought it would be fun to take Dylan in the arena and play ball Thursday. He took to the ball pretty much like everything else - great boy that he is. I started with just a halter and introduced the ball to him. He sniffed at it and gave it the "eye" but pretty soon decided that it wasn't anything to worry about. So I spent a few minutes getting him used to it bouncing off his shoulders and his back and rolling up against his legs. Nothing seemed to bother him so I next took my four foot training stick and waved it around him, getting him used to the idea that I wasn't going to ask him to lunge just because I was holding it and waving it around.

Time to hop on and try playing "polo." I used the stick to hit the ball and soon we were chasing the ball around the arena, herding it by hitting it with the stick - which wasn't very effective. I am going to try a broom next time so I can swat the ball better. But we had a great time and Dylan showed off his ability to understand the task at hand and ride herd on the ball. It was a great time of focus for both of us - we became a real team as we concentrated on moving the ball across the arena. I plan on recruiting some other folks so that we can play horse polo in the future - I think that would be a lot of fun.

The only problem I have now is deciding whether or not to include it in our fun kit. The whole idea of our kits is portability - grabbing your tote bag and heading to the barn. The ball is portable when it comes packaged - but once you blow it up I don't think you would want to deflate it. That would take a long time and I also don't know if you would want a ball that is dusty with arena dirt in your car - so the best place to store it would be a tack room. Does that take away from the portability idea of the kit - or is the 30" ball still a good idea to include in it? What do you think?
Posted by Nancy at 10:17 AM No comments: 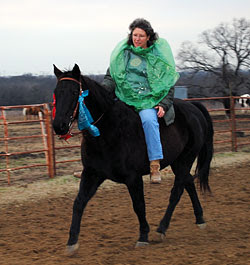 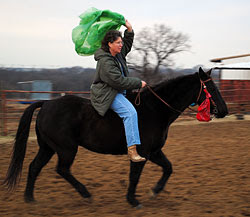 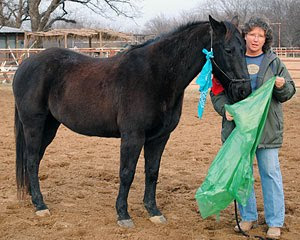 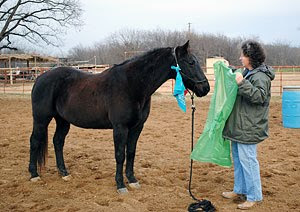 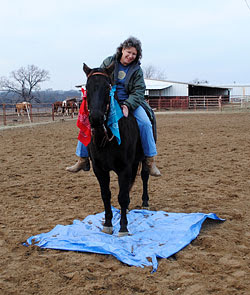 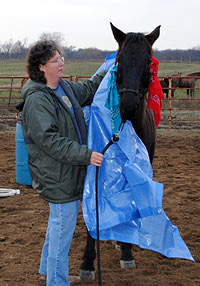 We finally got a long enough break in the rain to allow the arena to dry up enough to use, so I asked hubby to come along and take some pictures of Dylan and I using our desensitizing kit. I must say it was really convenient to just grab the tote bag and go - everything was ready to use and easily available. If you haven't heard of desensitizing before, it's just a fancy way of saying "getting used to something so it doesn't bother you any more." Since horses are prey animals, they are generally on high alert for things that could eat them (or what they perceive as something that could eat them, like the dreaded Walmart bag floating in the wind) so it is a great idea to work with your horse and get him accustomed to things that he may find frightening otherwise. We often introduce things to our horses so that they become familiar with the object and eventually lose their fear of it. As with people, horses are very unique and some are more afraid of different things than others. Each horse needs to be approached with sensitivity and allowed to progress at their own rate when doing this type of work.

We began our session in a halter and leadrope. I always spend just a few minutes lunging Dylan in both directions to A. Get his focus on me and out of "pasture" mode. and B. To check and see how he is feeling and if he is sound. 2-3 laps at a trot in both directions usually tells me all I need to know...and Saturday Dylan was very attentive and obviously feeling good, so we could begin our workout.
First I showed Dylan the bandannas, letting him look at and sniff them, and then I proceeded to rub them on his forehead and neck. Whenever he got a little tense I just slowed down and took my time - not removing them, but showing him that they wouldn't hurt him by my relaxed attitude. When he became completely relaxed, I tied them to each side of his halter. I lunged him a bit more with the bandannas on , letting him get used to their presence. Pretty soon he ignored them completely, which signaled to me that it was a good time to start our tarp work.

Just as I do with everything I use to work with Dylan, I allowed him to explore the tarp and satisfy his curiosity before actually subjecting him to having it used on and around him. After Dylan looked satisfied - I start doing with the tarp what I did with the bandannas - rubbing it over him, throwing it up in the air near him, flopping it around, all the while talking to him in a low reassuring voice and gauging my actions to his comfort level. It's okay for him to be tense at first, but that does not cause me to remove the stimulus. I am very attentive to how much pressure I am putting on him and his acceptance of the object - so that I slowly increase pressure only after he accepts and relaxes where we are at.
Pretty soon Dylan finds the tarp pretty boring so it is time to try to walk across it. Taking on a confident attitude, I begin leading Dylan like I would normally do going anywhere, and he senses my expectation that we are definately crossing the tarp. So after the slightest of hesitations, he does! What a great boy he is! Repeated crossings soon become old hat and Dylan is ready for something new.
We do the same with the poncho (the two bandannas, the tarp and the poncho are the primary tools for the desensitizing kit) and Dylan is as accepting of the poncho as he was of the tarp.

Now I think there are two things that contribute to Dylan's willingness and the great job he does with all this stuff. One, he is well-broke. I don't know much of Dylan's past, but I know that he used to be a ranch horse and so he has most likely received some thorough training. But there is definately another factor. Ever since my ribs healed enough, I have been working with Dylan consistently. My goal was to create a special bond of trust, respect and affection with him. That is how I got the idea for all of these kits - this is all stuff that I have been doing with Dylan these past months. And his response has been awesome! He has given me my confidence back (I flew off my previous horse in February and hit really hard - which is how I broke my ribs) and we are progressing so much in our relationship - we are becoming true partners.

But from what I have learned this past couple of years is that A. It is a process - it takes time to build a real relationship. As my husband Phil says, it takes "time on task" and B. You have to have the right partner FOR YOU. My mare wasn't that partner (I sold her to a great home where she is understood and loved) and it was so important for me to come to that realization so I could devote my energies to the horse that is meant to be my partner and have FUN with him. I am so thankful that I decided to sell my other horse and take my time to find the horse that was truly a good fit for me. That changed everything!

So back to our session! After working on the ground, I decided to hop on and see how Dylan would do with these scary objects with me on his back. I transferred the bandannas to his bridle and played with both the tarp and the poncho. Dylan did great! This is the second time we have done a session like this - using the items in the desensitizing kit, and Dylan takes it all like an old hand. But one thing I notice - even though Dylan is obviously fairly comfortable with bandannas, and tarps, and ponchos, I can sense that the time we are putting in together working with these things is building trust between us. Because even if scary things aren't very scary - it all boils down to trust. Someone else can approach Dylan with a bandanna and his response would not be to freak out, but he would move his head up and tense. Because while the bandanna itself no longer scares him, he does not know if the person holding the bandanna is trustworthy.

So no matter if you have a greenbroke horse or an experienced ranch hand like Dylan, desensitizing can be a very useful way to help your horse contain his fear and get used to scary things, and also a wonderful way to build trust between you. And both will help result in a safer horse that you can have fun with!
Posted by Nancy at 11:49 AM No comments:

Welcome and Reflections On Blog 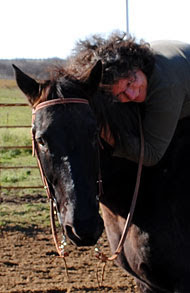 Welcome to our blog! I have been blessed to own my wonderful black gelding Dylan since late May of this year and we have been through many adventures together as we have been getting to know each other. Throughout this time, we have been doing many things in order to create and strengthen our horse-human bond. We have been using many different items to accomplish different objectives and through these efforts we have created specialized kits that we use for different areas of horsemanship. This blog is an attempt to share our progress with you, and hopefully to inspire you to work towards a similiar relationship with your own horse. I can't describe the feeling of joy and content I experience when Dylan and I are really in synch - but if you are a fellow "horse" person, I know you understand the feeling I am describing. We have created a variety of products that are offered on our web page at http://www.goldencrossranch.com/ in order to help with this process. We would like to share our journey with you, and would like to hear about your journey with your horse as well!
Posted by Nancy at 12:52 PM No comments: