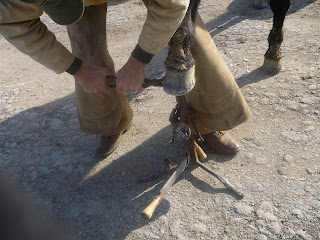 Well, it's that time again - Dylan usually gets a farrier visit every six weeks or so. Since hooves typically grow out slower in the winter months (a lot of a horse's "growth" is directed at developing those winter woolies during that time) it had been more like eight weeks. He has front shoes because we have been patiently waiting for a couple of cracks to grow out of his front hooves. 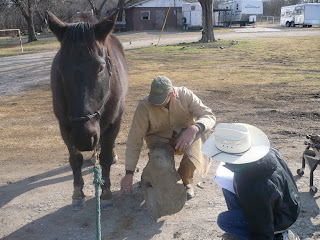 I am homeschooling Josh this semester and thought it was a perfect opportunity for a field trip. AQHA has a wonderful program for youngsters called Junior Master Horseman. For anyone with kids, it is well worth checking out - we have had a lot of fun with it. They have their own web page: www.juniormasterhorseman.com. The day before the farrier visit, Josh got out his handbook and we studied the section on hoof care. He learned all of the parts of a hoof and even did an activity with aluminum foil and a spoon to beat out a "horse shoe" to the shape of the pictures provided. He was well-prepared for his visit with the farrier. 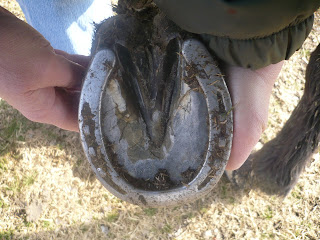 When the farrier arrived he also had a great handout for Josh that described not only the parts of the hoof, but legs and shoulders. The first thing we did was look at Dylan's rather muddy hooves. It has been freezing temps here in North Texas and the pasture is churned up and quite hard with frozen mud. While we were pleased that the cracks had finally grown out and Dylan could go barefoot again - we decided that considering the rough state of the pasture that we would do one more round of shoes to keep him comfortable until the pasture was in better shape. Decision made - the farrier turned his attention to Dylan and Josh.

Our farrier is a natural teacher and did a great job. I had to laugh at his first question for Josh: "How many legs does a horse have?" Of course he said four, and the farrier said, "Well, let's think about that. Yes. the rear legs are indeed legs but what about the front ones? See, a horse has shoulders, and humerus bones, both which are part of arms. So wouldn't we be more correct to say he has two legs and two arms?" I never thought about it but it makes sense! 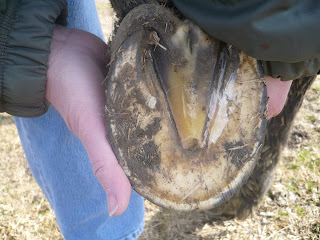 Josh had a great time and learned a lot. Mom learned a lot too! And Dylan was his usually patient and sweet self. We are so blessed that our farrier is such an awesome guy who is so great with horses and kids. Josh's assignment is to write a report on what he learned. Did you know that cows can wear shoes too? Or that shoes can conduct electricity?
Posted by Nancy at 6:14 AM No comments:

So Much To Be Thankful For

We had quite a scare coming back from our Christmas trip to Alpine, Texas where we visited family over the holidays. We drove about 500 miles and got home Sunday night. Monday morning on the way to returning our rental van, I checked voice mail on my phone and heard the words that strikes fear into every horse owner's heart - Dylan started to colic around 8:00 that morning (I got the message about 10:00 right as we pulled into the rental car place). We checked in the van in nothing flat (everyone at the rental place was very concerned and facilitated our quick departure)and raced to the barn. Dylan was already much better - we are friends with Jesus and his family - they live on the property and take care of the horses - thank God that Jesus noticed Dylan rolling in the pasture and immediately brought him up and have him banamine. Jesus walked him and Dylan got better so quickly that when I called the vet he just gave me instructions over the phone for his diet and care over the next couple of days. Dylan loves being in the pasture but with the nasty weather and his close call we decided to keep him in the pole barn, under Jesus's watchful eye since I live forty minutes from the barn. Yesterday I took Dylan for a walk just leading him and I could see he was back to his old self. This New Year's morning is a beautiful day and so we turned him back out into the pasture.

It was very scary over the last few days and we are so thankful for Dylan's speedy and uneventful recovery. It was also a timely reminder during this tough economy that we still have so much to be thankful for. Money may be shorter than the past, but we are long on the love of family, friends, and of course our faithful four-legged friends. With the start of a New Year it is good to reflect on the many blessings we have received despite the uncertainty of the future - and resting in the peaceful assurance that God is in control when things (like Dylan colicking) seem out of control.

I pray for each of you a blessed New Year filled with joy and the eyes to see how truly blessed we really are...even when it doesn't always feel like it. "Thank you Heavenly Father for caring for your special horse Dylan whom you created and love - and for giving us more time together here on earth. I have so much to be thankful for - Help me this New Year to see the blessing of the gift of each new day, and to use that day to bless others in your Name. Amen."
Posted by Nancy at 10:47 AM No comments: